Garlic: An Edible Biography (T minus 10) 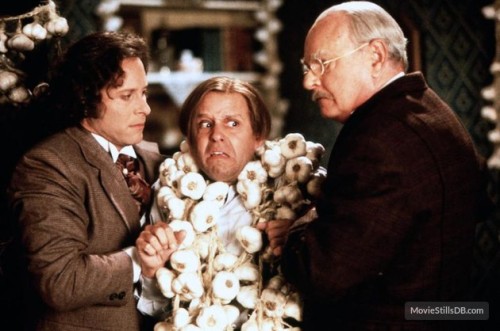 Happy Halloween. While it seems logical to do a vampire post, vampires are not especially active on Halloween. Their most active times are the eves of two religious holidays: the Feast of St. George (May 4) and the Feast of St. Andrew (November 23). Nonetheless, here’s a photo from garlic-lover Mel Brooks’ much lambasted 1995 film Dracula: Dead and Loving It.

Brooks had many “garlic moments.” In the classic comedy routine, The 2,000-Year-Old Man, Brooks is the title character and his good friend Carl Reiner is interviewing him. When Reiner asks Brooks how he has been able to live so long, he says, “It’s simple. I eat garlic. I’ve eaten it with every meal for 2,000 years. Whenever the Angel of Death came for me, I looked him right in the eye and said, “Whoooo are youuuu? The garlic on my breath always sent him packing.”

Brooks also outs Reiner as a garlic eater. Reiner was part of the tribute when Brooks received his star on the Hollywood Walk of Fame. Addressing his friend, Brooks asks, “Carl, did you have garlic for breakfast this morning? Folks, I don’t know what it is, but this man has been my friend for sixty years, and he always reeks of garlic, but I love him anyway.

Brooks later said of his own longevity: “Eat plenty of garlic so the angel of death won’t kiss you. Eat pounds of garlic.”

Brooks’ parents’ families were Jewish immigrants from Poland and Ukraine, but I don’t have a Polish or Ukrainian recipe in the book so I’m including a recipe for a traditional Jewish Sabbath dinner in Bukhara, Uzbekistan. As Bukhara is landlocked, the dish is usually prepared with freshwater fish like trout, pike, or catfish.

1. To make the garlic-cilantro sauce: Combine the garlic, salt, ½ cup water, and cilantro in a food processor and process to a fine puree. Season with additional salt if necessary and set aside.

2. Arrange the fish fillets or steaks in a single layer in a deep platter or pan. Dissolve 1 teaspoon salt in 1/2 cup water to make a brine and pour over the fish. Refrigerate the fish in the brine for about 20 minutes. Drain the brine from the fish and pat completely dry with paper towels.

3. Heat 1/4 inch of oil in a large, heavy skillet over medium heat until it shimmers. Add the fish and fry, turning once, until golden brown, about 10 minutes. Blot the fish briefly on paper towels and then transfer to a serving platter or individual plates. Top the fish with the garlic-cilantro sauce and serve at room temperature or chilled.